Report from the south coast

Got some photos and comments from a good friend that fished a south coast impoundment over the Christmas break.

The Bass were only small but heaps of them. They really took a liking to the Black Knight wake bait.

Thanks Paul for the pics and kind words 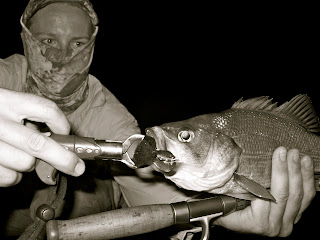 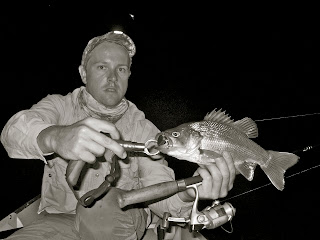 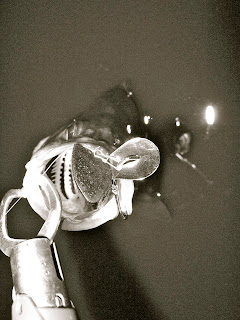 Posted by Nutterjuck lures at 2:40 AM No comments:

Bass Baits to be released

The first release of Nutterjuck Bass bait is on us. These two styles (walker and wake) will only be available  in the standard two Nutterjuck colours, Black Knight or White ghost. These combine a flocked under body and a high gloss painted top. The flock gives these lure a different look and feel. 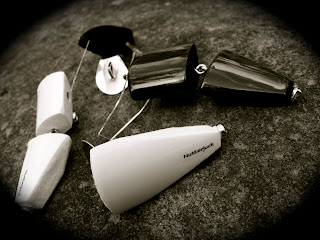 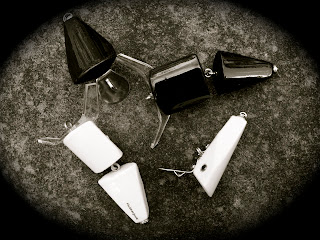 Posted by Nutterjuck lures at 2:55 AM No comments:

With a lot of the state receiving most of its monthly/yearly rain fall in the last few days I should of known my local system was going to be in flood. Drrrrrrrrrrrrrrrrrrrrrr. So it was a shock when I got to the river to find it in full force.  So plan B was put into action, well I sat in the car thinking what am I going to do now.
Thinking back a few years I caught my first wild 50cm when this system was in flood. Back than I was fishing an eddy that was at my feet. 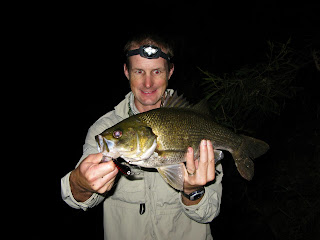 First wild 50cm fish when the local was in flood. Old school Nutterjuck walker
With this info in the back of my head I stopped the car at the same spot this fish came from. A quick look over the edge and the same eddy was still there.
A new style nutterjuck wake bait was already on the rod so this was the first lure to be used. The technique used last time was to have the lure about 1m off the tip of the rod and walk the bank while holding the lure in the eddy. Just like last time, the water erupts as a depth charge goes of at my feet. This is in your face fishing. The hooks found their mark and the rod was locked and loaded. With a give nothing fighting technique (also testing to see if the lure and hold together) the Bass takes to the air than a power dive. 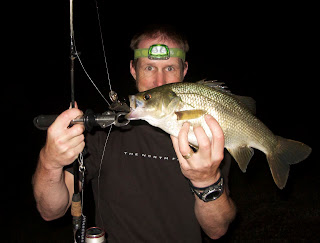 Nutterjuck wake bait walked just of the rod tip
This was no 50cm fish like last time but the theory worked. At around the 35cm mark it was in good condition and fat. After a quick few photos she was released to grow a bit bigger.
Some ask about using the lip grips and give there two cents worth. I believe that when land base fishing they are the best thing going. Tie a cord/ spring cord or just a length of rope to the handle so when you catch a fish use the grips like they are meant for than leave the fish in the water. This way you can set up your camera with the fish still swimming on the grips.
After this first fish they shut down, its only a small eddy. A change of lure and eddy. This time a jointed Nutterjuck walker was rigged. This was casted out across the current flow and worked ever soooooooooooooooo slow until it was in an eddy at my feet. Yep you guessed it, At my feet a BOOF that missed the lure. A quick flick of the rod without casting any line the lure was smacked back into the eddy. With a 30cm movement of the rod tip the Bass implodes the walker. Again the give no line fight technique was used and a fat 34cm fish was lifted out. 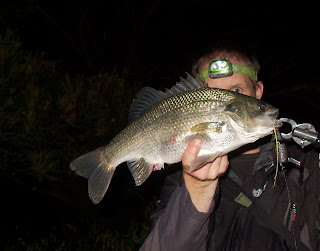 One has to think if these fish are having a second spawn or still on there first run
A few smaller fish followed that night and another good Bass taking the walker again at my feet.
Three days latter with so more rain over the weekend I was in high hopes of finding some more flood water fish. This was the plan but again things changed. The water level had dropped heaps. Still the river was in flood but along way down compared to other night. Anyway with out going into a full story about the nights unfolding Ill let the photos tell the story. 4 fish in the low to high 30's, all on the Black flocked wake bait. (this is still the proto being used) 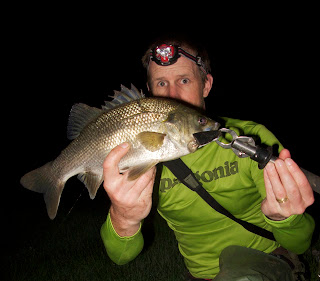 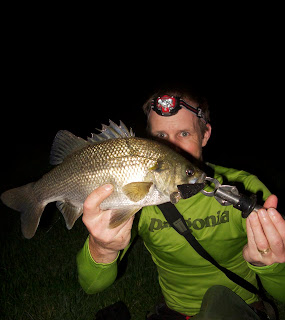 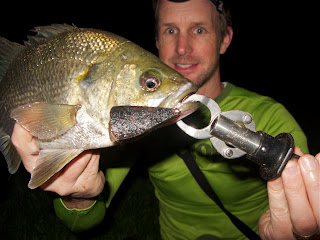 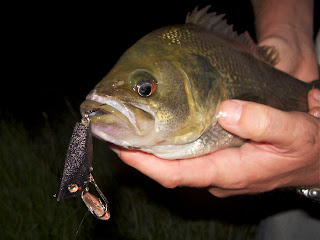 Hope to have a few Bass Baits ready for release soon so keep an eye on this blog for release dates.
Posted by Nutterjuck lures at 2:44 PM No comments:

Well the first bunch of OTT (over the top) Nutterjuck sticks are ready for release. Be one of the first, get one or two of the new range sticks. The specs for these stick baits-
Length 220mm (not including blade)
weight 120grams
2.4mm stainless thru wire
#5 NT power swivels (rated to 540kg)
Available in Black knight or White ghost. All lures have a hint of glitter. The white is an off white or dirty white.
Plus one extra blade incase you damage one 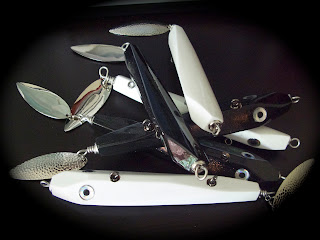 Nutterjuck lures
NSW, Australia
Hand made timber lures made for a function not a price.